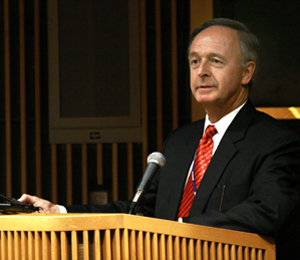 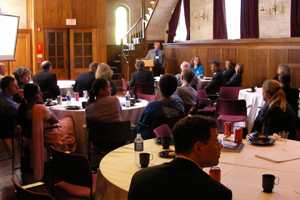 Dan Carucci of FNIH spoke to participants gathered at the Cloisters, a former convent of the Sisters of Visitation. (Photo courtesy of John Maruca) 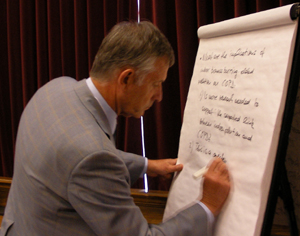 Shown here recording comments is Adam Wanner, M.D., a specialist in pediatrics and pulmonary disease at the University of Miami. According to Martin, some of the most valuable interchanges took place during the discussion sessions. (Photo courtesy of John Maruca) 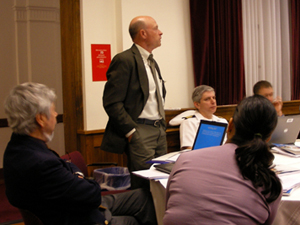 Jim Kiley, Ph.D., standing, director of the NHLBI Division of Lung Diseases, was one of many attendees who took advantage of the forum's open discussion format. (Photo courtesy of John Maruca)

In the most recent development in its Global Environmental Health (GEH) program, NIEHS sponsored a Forum, titled "How Partnerships Overcome Barriers to Improve Global Environmental Health," on September 28 at the Cloisters on the NIH Bethesda Campus. The gathering was designed to foster informal collaborative networks among U.S. and foreign public and private sector organizations with interests in GEH.

According to organizers, the day-long meeting gave individuals who normally have little occasion to interact with one another a rare opportunity to explore shared interests and potential partnerships that could offer mutual benefits and enhanced outcomes as a result of shared resources and expertise.

Participants were affiliated with a broad range of institutions, organizations and businesses. Private sector for-profit participants included Coca Cola, Enzen Global and Bosch-Siemens, makers of clean burning biomass cook stoves with the potential for reducing significantly the indoor air pollution that contributes to the deaths of 1.6 million individuals each year.

They were joined by funding sources, such as the Shell Foundation and the Global Environment and Technology Foundation, and NGOs. The latter ranged from the well-known World Health Organization to the grass-roots KIWAKKUKI, the Kilimanjaro (Tanzania) Women against AIDS, and the non-profit Population Services International, which harnesses the vitality of private sector marketing to address the health problems of low-income and vulnerable populations in more than 60 developing countries.

The event brought together several federal agencies, including the EPA, Centers for Disease Control, U. S. Group on Earth Observations, the U.S. Agency for International Development and U.S. Department of State. Dan Carucci, M.D., Ph.D., director of the Foundation for the National Institutes of Health (FNIH) Grand Challenges in Global Health Initiative, spoke on public-private partnerships, and participants attended from the John E. Fogarty International Center, NIH Office of the Director, National Center for Minority Health and Health Disparities, National Heart, Lung and Blood Institute (NHLBI), National Institute of Allergy and Infectious Diseases, and National Institute of Child Health and Human Development.

Martin is currently working on a summary white paper on the forum and organizing reams of working notes from discussion groups. He envisions several possible options, but has no firm plans at this time, for future directions within the GEH program. There are massive challenges, he explained, but, from the NIEHS perspective, the key to addressing issues of environmental health in the developing world lies in bridge building and facilitating cooperative efforts.

Stressing the importance of such partnerships, Martin referred to an epigram by colleague Jacob Moss that he plans to include in the meeting summary: "The world is intuitively weaving itself into collaborative networks; those that do it better, prosper."