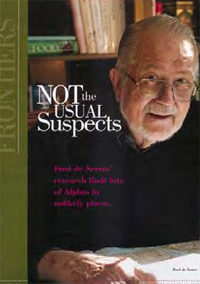 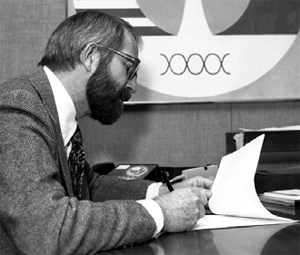 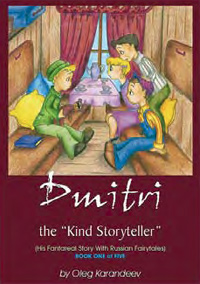 At age 77, long-time NIEHS scientist Fred de Serres, Ph.D., should, as he puts it, "sit and watch movies." However, the semi-retired researcher has remained inspired by the kind of work he did as associate director of genetics in the Office of the Director at NIEHS from 1979 to 1986 and by his interest in Russian fairy tales and other children's literature. He is also passionate about setting the medical community straight on a health condition that has had an enormous impact on his life.

In 1997, doctors diagnosed de Serres with a genetic mutation that causes a deficiency in in the protease inhibitor alph-1 antitrypsin (AAT) and makes him more susceptible to respiratory diseases. That diagnosis sparked his crusade to raise awareness of the importance of targeted screening for a condition that was once considered rare. His own diagnosis after so many consultations with some of the region's most prominent specialists made him wonder, "How many others did they miss?"

For the past nine years, his research has been a quest to answer that question and help physicians learn to ask the right questions about AAT (see the report on de Serres' AAT Deficiency studies in Science Notebook). "I feel a very strong commitment to the patient community," de Serres explains, "to make sure others don't go through what I've gone through."

de Serres is currently a guest researcher at the Center for Evaluation of Risks to Human Reproduction at NIEHS. He began his career in biology at Oak Ridge National Laboratory after completing his doctorate at Yale, where he developed his career-long interest in the interaction between genetics and environment. In the course of his career, he has served on the editorial boards of 11 journals and been the guest editor of several special issues.

de Serres traveled extensively in Asia and Europe in his work with the US-Japan Cooperative Medical Sciences Program, the US-Soviet Environmental Protection Agreement and several international collaborative studies. A prolific author with a long career that predates PubMed, he has over 490 publications in science literature, including articles, book chapters, reviews and conference proceedings.

While working in several capacities at NIEHS and elsewhere in the Research Triangle scientific community, de Serres taught in the Department of Pathology at the University of North Carolina at Chapel Hill. He has received many awards in recognition of his accomplishments and has been a member of several professional societies and collaborative study groups, panels and foundations. One of de Serres' recent honors was the Alpha-1 Explorers Award presented by the Alpha-1 Association in 2002 in recognition of his research. He also serves on the Board of Directors of the Alpha-1 Foundation.

Unlike many of his colleagues in environmental science, de Serres is also interested in children's literature. In 2005 and 2006, he served as co-editor of Dimitri, the "Kind Storyteller" by Oleg Karandeev. A native of Nizhi Novgorod, Russia, Karandeev writes in both Russian and English, but Entry Way Marketing and Publishing, who issued the book in an American edition, realized that his English was too formal and stilted to appeal to native speakers. That's where de Serres came in. The scientist combined his love of folk lore and fairy tales with his practiced ear for conversational English to produce a far more readable version of the fairy tales.

de Serres would love to retire after he completes the two new AAT studies presently in the works at NIEHS (see related story in Science Notebook) and leave his work to others. He also wants to pursue his lifelong love of photography. In the course of his travels, he has taken over 6000 slides that he hopes to catalogue and digitize.

However, de Serres is a man called to a mission. Even as he talks about the lure of retirement, he suggests it may be that "God [just] doesn't want me to retire."